The Saga of One Beverly Hills 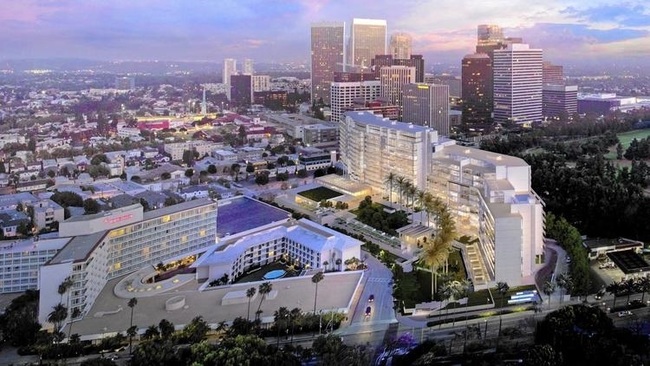 But four years later, the site at 9900 Wilshire Blvd. remains a dirt hole between the Los Angeles Country Club and the iconic Beverly Hilton hotel in one of the country’s top hotel markets.

Like developers who owned the site before it, Wanda Group hasn’t been able to get the project known as One Beverly Hills built. The firm, which was subject to capital controls issued by the Chinese government to curb the perceived overspending by its domestic companies like Wanda, has been selling off its global assets and is trying to sell this site to the next developer looking for a prime undeveloped piece of real estate.

But if someone doesn’t buy it soon, the fully entitled project designed by Richard Meier’s firm could remain a dirt hole for years to come, brokers say.

They point to a neighboring condo tower proposal by Beverly Hilton owner Beny Alagem that may give Wanda’s project stiff competition. Meanwhile, analysts say there’s a risk that developers may begin to grow wary of building a project with a four-year construction timeline that could span into a weak or stagnant economy, leaving little demand upon completion.

In the past six months, the 9900 Wilshire site has received interest from some of the most notable names in commercial real estate worldwide, according to sources who were part of the marketing or bidding process but were not authorized to speak about it.

They say that among those interested were New York luxury residential developer Discovery Land Co.; New York real estate developer Related Cos.; and Wanda’s former business partner at the project, Phoenix-based luxury hotel-condo developer The Athens Group. Related Cos. declined to comment. The other firms did not return requests for comment.

A variety of developers and investors made it through three bidding rounds this year that pumped the final offers up to at least $400 million for the land, according to a source involved with one bid.

At one point, Wanda was in advanced negotiations for the sale with New York’s private equity firm 54 Madison Partners, which is an investor in Beverly Hills developer Alagem’s Beverly Hilton and Waldorf Astoria hotels next door to the site, two sources knowledgeable of the discussions said.

But the negotiations ended when the two parties couldn’t agree on the final price, a source said.

“The project is like a prom queen,” said Adam Tischer, senior vice president at Colliers International in Los Angeles, who is familiar with the site but not involved with the sale process. “Everyone wants to date her,” but she’s always out of reach, he explained.

Wanda had hired Chicago real estate brokerage Jones Lang LaSalle Inc. to market the property with the goal of having it sold by May. A spokesman for JLL declined to comment.

The firms never publicly disclosed an asking price. Wanda paid about $420 million for the property in 2014. The company isn’t interested in taking a haircut on the property now, said sources who had been involved in the bidding or were consulted by a bidder about the price.

Wanda is one of the world’s largest private property developers and cinema chain owners. Among its holdings, it has stakes in the AMC theater chain and owns more than 200 properties in China. Based in Beijing, the company is led by billionaire Wang Jianlin, who Forbes lists as the fourth-wealthiest person in China, with a net worth of $28.8 billion.

When it bought the property, Wanda Group was one of a number of China-based conglomerates such as Anbang Insurance Group and HNA Group that between 2014 and 2016 had been acquiring properties worldwide, in part fueled by relatively loose domestic restrictions on international spending and cheap debt from China’s national banks.

Luxury real estate, in particular luxury hotels, were a choice product for the China-based firms that bet on the short-term and long-term returns. In the U.S., the firms initiated a wave of top-priced acquisitions that rushed through coastal cities. Among them, Anbang acquired the Waldorf Astoria in New York for a record $1.95 billion.

But as the China-based firms took on more debt in expanding, officials in that country grew concerned and cited the leverage as a threat to the security of the national economy.

In response, late last year, China’s government issued stricter controls on the outflow of capital from its domestic firms and cracked down on Wanda and other leveraged China-based conglomerates, which began to sell off their global portfolios in efforts to pay down their debts.

Wanda has been successful in selling off many of its other properties from Australia to England. It collected more than $9 billion for its properties, including theme parks and hotels, in the past year and has been able to pay down a significant portion of its debt.

But in the U.S., the company is being met with a market much softer than the one it bought into four years ago. It hasn’t been able to garner the price it hoped, sources say, and price could be where the sale is held up.

By all accounts, the property is one of the best for a hotel.

Jeff Lugosi, a managing director at Los Angeles brokerage CBRE Group Inc.’s hotels consulting practice who has been involved in two sales at the site, said there are only a few markets in the country that garner the average room rate a top-tier hotel in Beverly Hills can – at about $800 to $1,100 a night.

“So if you are going to build a luxury hotel, you can count on one hand where they are going to be,” he said. “Beverly Hills has a brand recognition that is indisputable.”

But the price Wanda is said to be hoping for could be hard to pencil out when total costs of the project are taken into account.

Greg Cory, who advises developers on hotel and resort development at Cayuga Hospitality Consultants, said a typical valuation on a project of this size would put the land value at about 17 percent of construction or total cost of the hotel. On a $1.2 billion project, that’s about $204 million.

But for $400 million, “there’s not a hotelier in the world that could afford that kind of a price,” he said. “I’m having a hard time seeing the value there. If you look at their price of $1.2 billion, you divide that by the number of keys, including the condos and hotel, and that comes about $3.8 million per key.”

He said a rule of thumb in the hotel industry is to keep the cost per key low relative to the nightly rental rate for the room.

“If it’s a $1,000 a night hotel, you can spend $1 million a key all-in, land and construction,” he said. “For really prime properties, a hotelier can afford to pay a bit more.”

Adding further cost to the project, as part of the deal, Wanda promised the city an unprecedented developer’s fee of $60 million over three years once the project is built. Any developer who buys the project will take on that expense as well.

Beverly Hills City Councilmember John Mirisch said the city isn’t counting on that money but the amount does reflect the value the city brings to the project.

“My feeling is when you have developers who are burning extreme levels of profit on the backs of the community, they should have to share it,” he said.

The project has taken so long to be built that it’s already been surpassed by a neighboring hotel, the Waldorf Astoria.

That project, which shares the property and an owner with the Beverly Hilton, received entitlements at about the same time as the Wanda project. It has been built and opened last year.

“People in Beverly Hills compare the two sites since they were entitled at virtually the same exact time,” said Harvey Englander, who has been a consultant at the 9900 Wilshire site several times and does lobbying for Beverly Hilton and Waldorf-Astoria owner Oasis West. “The Wanda site has gone through ownership changes. There’s been demolition and some water pipe work done. You compare that to right across the street, which was entitled a month later and had to face a referendum, which slowed it down some more, and you have a Waldorf hotel, which is surpassing everyone’s expectations.”

But the struggle to get the property built started years before Wanda even got involved. The parcel has been traded among hopeful developers and investors since 2004.

The story starts in earnest with Beverly Hills real estate firm New Pacific Realty, operated by David Margulies and Arnold Rosenstein, which bought the property in $33.5 million in 2004.

At the time, the site was occupied by department store Robinsons-May, whose owner May Co. had a long-term lease. But after being acquired by Federated Department Stores, Robinsons-May closed in 2006. The New Pacific executives saw an opportunity to sell the site.

British developer brothers Nicholas Candy and Christian Candy bought the property for $500 million at the height of the market in 2007, one of the most expensive sales in the region at the time. The brothers got the first iteration of this Richard Meier-designed project approved in 2008 as two towers with 235 condos and 16,000 square feet of retail space.

But the Great Recession hit and they lost the project to foreclosure. It ended up in the hands of Mexican billionaire Carlos Slim’s Banco Inbursa.

It changed hands among investors a few times before a group of Hong Kong investors known as Joint Treasure International bought the property from the bank in $148 million in 2010 and demolished the retail site.

In 2014, Wanda Group bought the property for an estimated $420 million as part of its growing global portfolio. It modified the plans to include 134 hotel rooms with 193 luxury condos in one 15-story tower and a 13-story tower as well as public park space.

The project is designed to provide an open and airy feel on the property with curved, linear buildings set atop columns to keep the ground level open for garden space. The design includes rooftop terraces and floor-to-ceiling glass walls as well as a three-story glass lobby that is envisioned as an extension of the hotel’s gardens.

Partnering with Athens Group, which built the lauded luxury hotel and condo project Montage Beverly Hills nearby the site, Wanda toiled to get the project off the ground and began excavation work to get ready for construction.

But it became clear things weren’t moving forward as planned when Athens Group walked away from the project in October last year for undisclosed reasons.

Then two of the project’s contractors, design consultancy firm and project manager Arcadis and construction company Rudolph and Sletten, each filed separate mechanic’s liens against the development, claiming Wanda is overdue on payments for a total of about $2.5 million for work they did at the site. Those liens have since been released.

Despite its efforts to sell the property since, Wanda remains the owner of 9900 Wilshire Blvd.

Stephen Basham, senior analyst with CoStar Market Analytics, said the site could prove complicated for a developer considering the project at this point in the economic cycle.

“On the one hand, we are absolutely on the downslope of this economic and redevelopment cycle,” said Basham. “In general, you would be nervous about kicking off a big project at this point. If you’re delivering in four to five years, there’s a moderate chance you deliver into a recession or stagnation.”

One the other hand, wealthy markets like Beverly Hills often withstand the ups and downs of the economy better than the average city, and large swaths of land such as the eight acres at 9900 Wilshire are rare in a region as built out as Los Angeles.

“So there are a lot of positive factors that might balance out the potential danger of building at this point in the cycle,” Basham added. “If you are looking long-term and not short-term, you are building in one of the jewels of Los Angeles.”